Our final day at Korea was spent on last-minute shoppings and strolling about Dongdaemun &  Namdaemun Markets. Our flight was scheduled at 11.30pm night and even though we had an entire day to explore, we decided to stay around town.

This is a relatively new Hanok-style traditional accommodation located near Anguk station. Like most Hanuk-style rooms, the room that we got wasn’t cheap. The room we were given was located on a different street from the registration office. If you’re expecting a traditional garden here, I’m sad to say that our ‘branch’ was rather small and only consists of a few rooms, common toilets, a small kitchen and an open area. The breakfast provided weren’t really appetizing either. Still, we liked that the room and toilets in Yoo’s Home were clean. 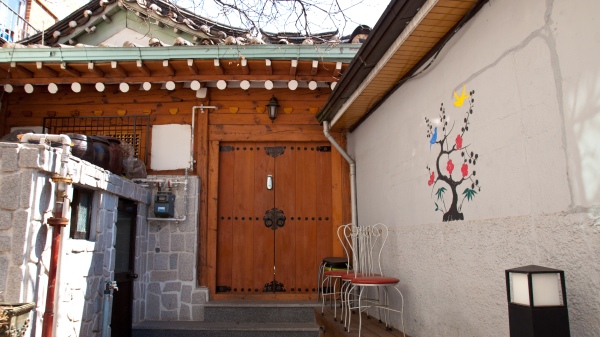 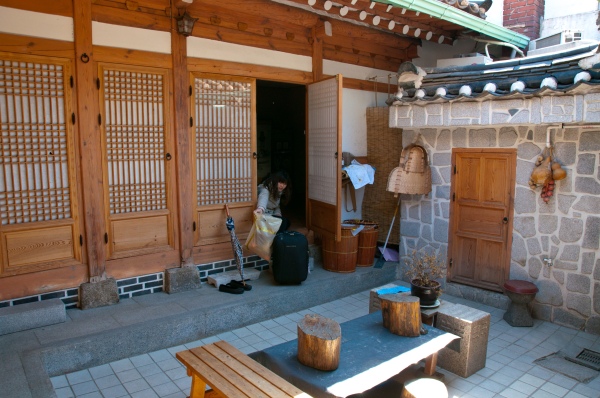 According to Megasari, Dongdaemun is a popular place for apparel traders all over the world. Apparently, her uncle and the other traders would travel to Seoul at night to visit Dongdaemun in wee hours of midnight. According to the guide pamphlet we had, Korean wholesalers would display all their products as early as 3am and by 6 or 7 in the morning, hundreds of deals would have been made. Of course, we had no reason to be up that early, so when we got there at noon, it was mostly retail stores that were opened. We visited the toy and shoes wholesale sections but didn’t really find much of interest. There were a number of proper shopping malls and departmental stores around Dongdaemun but we found the prices were pretty expensive. It wasn’t a great deal to buy to be honest, although we got ourselves some cheap caps.

So after we had our snacks/lunch at Dongdaemun, we headed over to Namdaemun. Namdaemun was more lively and reminded us of our own Petaling Street. Amongst other stuff, you could find loads of street food, souvenirs, knock-off apparels and electronics along the Namdaemun street. At the end of the street, there is a row of shops specializing in photography equipment (If you’re unsure, ask one of the guides around). For the digital stuff, we have it cheaper in Malaysia however the shops were also well stocked of classic film cameras. From the all-manual Canon AE-1 to the pricey 645 Medium Format cameras, the extensive range of well-preserved film cameras will sure impress even the hardcore enthusiast. Tempted by my own impulse calling, I took home the Nikon FM2n and a Nikkor 50mm f/1.4 AI-S for a fee of USD$300. =) 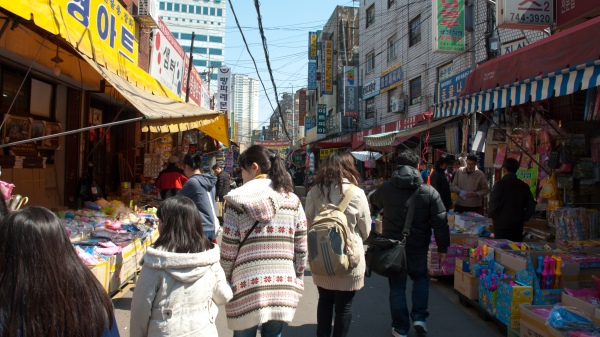 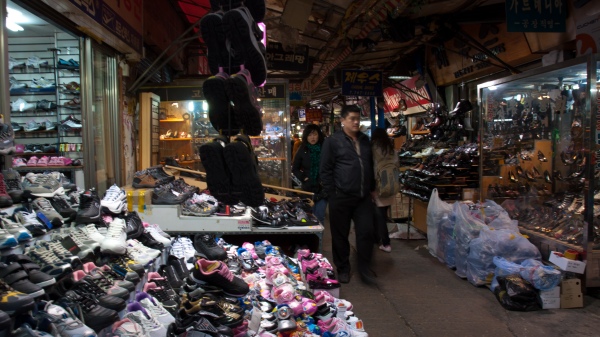 While we were at Namdaemun, there was a Dragon Beard Candy stall mended by 2 lively youths that caught our attention. Although this delicacy is available in Malaysia, it was fun to watch how it’s made as they 2 young chaps were singing in harmony during the process. You have to watch the following video and even though you don’t understand a word, you have to agree it’s amazing:

By the time we were done with Namdaemun, it was late in the evening and we went back to Yoo’s Home to retrieve our luggages. On the way to Incheon Airport, we were really sad that our trip was coming to an end. Even though we were pretty much sick of kimchi by the end of the trip, we missed having the whole dining table filled with cold side-dishes. We also missed the warmth shown by the local people we came across. Although the 7 days we had there was enough to cover the places we wanted to go, I felt that there are still many things to explore in Korea. If there was an opportunity to return to Korea in the near future (Work in Korea maybe? =D It’s pretty stressful though – I reckon -as the pace is a lot faster than Malaysia’s.) I would take it without hesitation. Still, as far as leisure travel goes, it will probably be years before either of us return to Korea. Perhaps by then Seoul would be far more advance than Tokyo and at the rate Korea is going now economically, you wouldn’t bet against it. 😉 Still, I appreciate the nature side of our trip and would die to see Jeju in spring.

Well, until the next trip, all we have now is sweet memories. I hope you enjoyed the Korea Trip series and learnt a thing or 2 about Korea. If you need any assistance or advice on planning for a trip there, feel free to contact me. =)