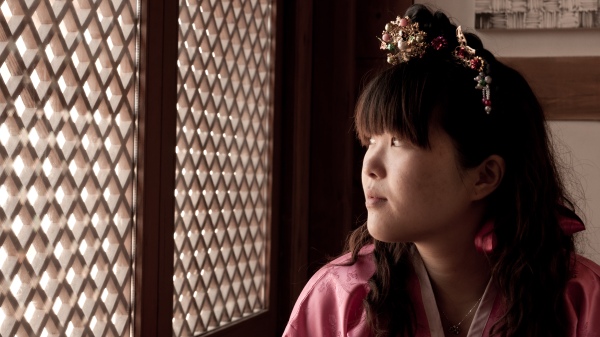 On the  morning before we left for our west tour in Jeju, we heard from a Philippine traveler that the weather forecast predicted that Seoul would be snowing at night. They were disappointed as they just got to Jeju and knowing that they would miss it. Lucky for us though when we arrived at Gimpo airport late in the evening, the forecast was spot on – it really was snowing! 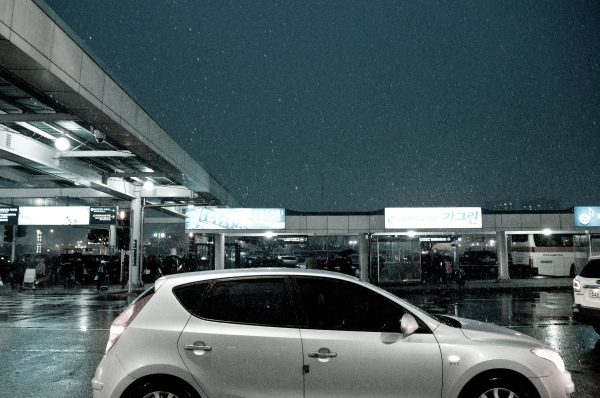 I still can’t decide if the snow was a good thing or a bad, as we practically had to drag our luggages under the snow for 10 minutes or so. What’s worse was when we got to the lobby, we were told that our room was situated in a different street and had to walk another 5 minutes after check-in. We could only be thankful it didn’t snowed heavier.

Still, it was quite an experience and plus, we got to see some snow even if it’s for awhile!

Once we unloaded our luggages, we took the train down to Myeong-dong for dinner. Myeong-dong as you probably know is a shopping district filled with both international and local apparel brands. Most of the shops opened until midnight and it was still crowded when we got there.

It felt nice to be back at civilization but honestly, I missed the simple stuff in Jeju already. 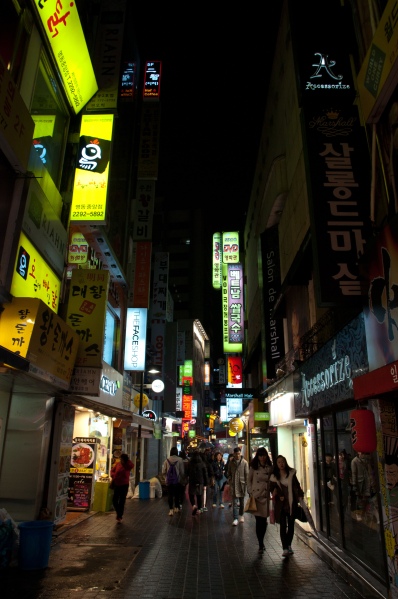 There are a number of well-preserved palaces in Seoul, namely the famous Gyeongbukgung. Originally I did not plan to visit Changdeokgung but as it was located near our place, we decided to drop by the following morning.

Somewhat less known than Gyeongbukgung in a tourist’s eye, Changdeokgung was in fact the longest-serving palace for the royal family. Within the palace’s compound is an attraction within an attraction – Biwon/the Secret Garden, which probably would be a must-visit site during Spring. Needless to say, we skipped it. (Oh, there’s another entrance fee for the secret garden) Certain sections of the palace were destroyed during wartime and restored in the early 90s. It was interesting to see the re-built structures incorporated western designs into the oriental structures. 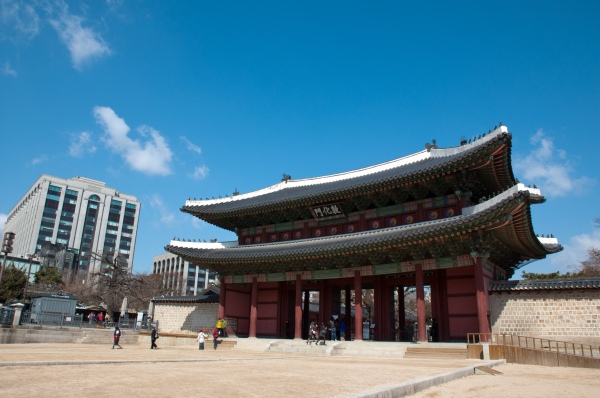 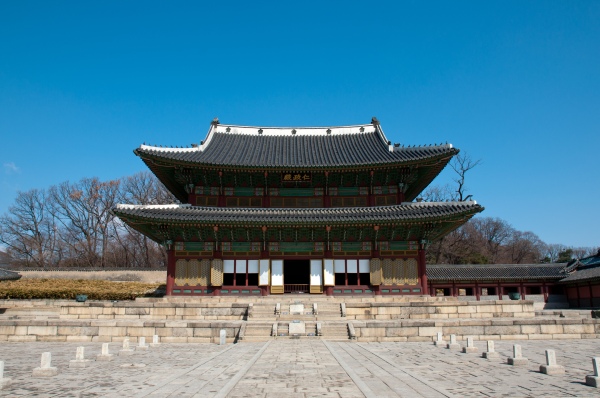 Patjuk is a sweet red bean porridge dish that is quite popular among the Koreans. Having read many rave reviews about the Patjuk at one of the cafes in Seoul, I thought we should at least give it a try and took a cab there. (I don’t know how to pronounce the cafe’s name but apparently it means “Second Best in Seoul”) Perhaps I’m already used to our own Chinese Red Bean soup, the sweet dish didn’t really live up to expectations. It was a tad on the sweet side to our liking and the taste wasn’t remarkable.

After our quick bite, we took a walk down to Gyeongbukgung. (It took about 15 minutes) The palace was pretty well-preserved and there were even mock ancient guards at the entrance. We were lucky to catch the ceremony where the fresh guards replace the current one. 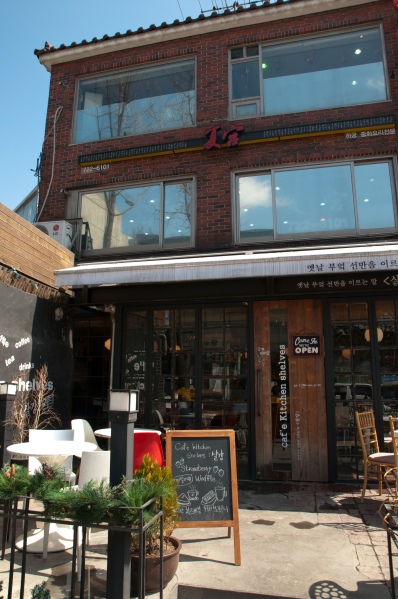 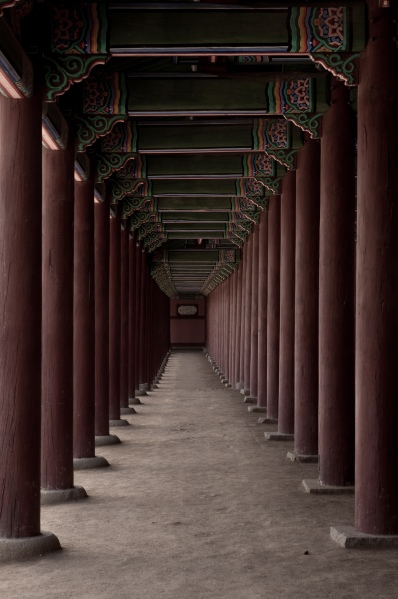 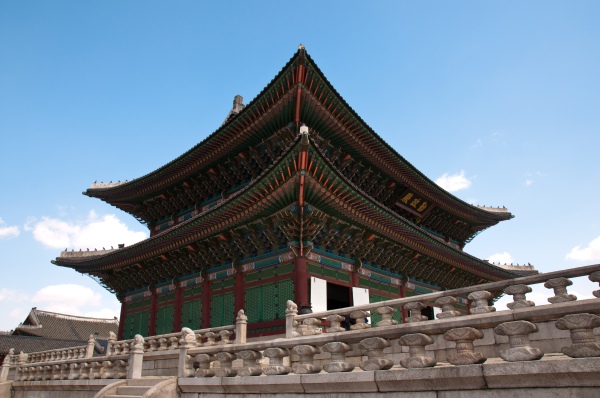 Tosokchon was another restaurant that received rave reviews online. When we got there, we were surprised that most of the staff were fluent in mandarin, which was actually more of a disappointment as we tend to equate touristy to rip-offs. Fortunately though, the Samgyetang /Ginseng Chicken soup turned out to be the exact opposite. Served piping hot, it was perfect antidote to the chilling weather. The broth was sweet without the ginseng overpowering  and the glutinous-rice stuffed chicken was well-cooked and tender. Apparently it would make a great summer dish as well but all we recommend is, give this a try. 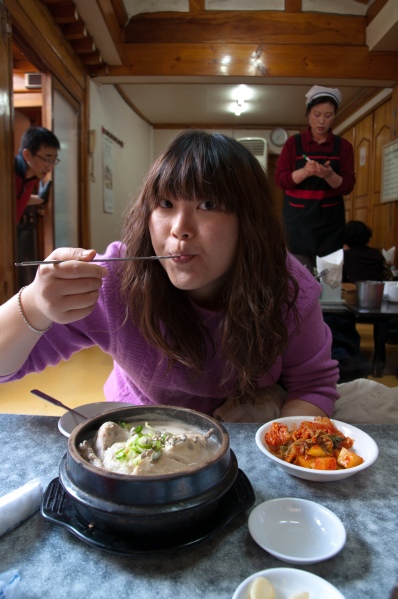 The only reason we visited this place was they had some traditional costume rental services. At 30,000 won (Approx RM85) per couple, you could get a free photoshoot with the cost of your choice as well as 2 sets of tea. After we registered, the staff brought us to the changing room, which had a large range of traditional clothes to pick from.  Megasari picked her favourite pink outfit while I chose the plain but never-goes-out-of-fashion light blue design. We had a few laughter as we look funny in these outfit. At the end of the day, it was fun and they actually let you parade the outfits for as long as you like if you fancy a fashion show. After all, I’m sure there are many who wants to live their favourite Korean drama moments. 😉

Back to Myeong-dong and Nanta Theater

After Namsangol, we head to Myeong-dong to get our Nanta show tickets. When we got the tickets, we had the whole evening at Myeong-dong but honestly, there weren’t much to do there. Shopping is expensive if you compare it to KL so it’s mostly window-shopping for us.

So, the night couldn’t come any sooner and as soon as the sun sets, we headed to the Nanta Theater. The show was a full house and it was really enjoyable. Watching a musical with sliced, chopped, minced food flying around the stage was fun and more impressively was the fact that the kitchen tools / accessories used on-stage were real. Tickets are priced at 40,000won, 50,000won and 60,000won (Roughly RM110-170) depending on the seat placement. Definitely worth checking out as it’s a brilliant show for kids and adults alike. =) 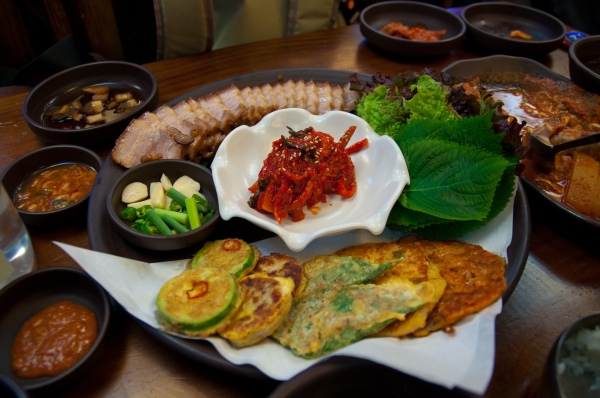