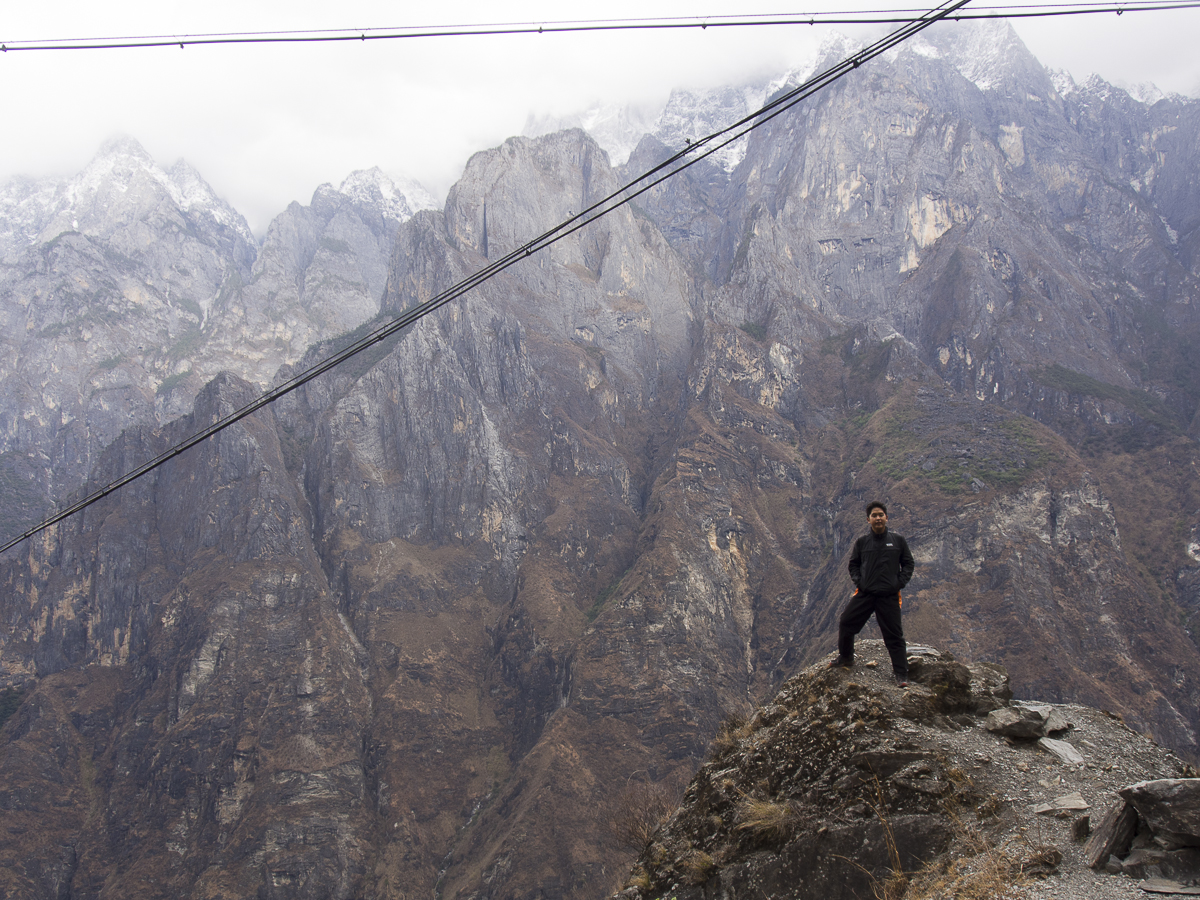 Southwest China is full of beautiful landscapes and hiking opportunities. Yunnan province (云南), translated as Southern Clouds had its name was derived from its geographical location in the mountainous region. It borders neighbouring countries Vietnam, Laos, Myanmar and Tibet (Shhh… don’t tell any Chinese official I said that.) It is known for its snow mountains, postcard-eque lakes, deep rivers and gorges, as well as well-preserved ancient cities.

I don’t consider myself as a serious hiker but I planned a few hikes for my trip. Tiger Leaping Gorge (虎跳峡), near Lijiang was my first test. Legend has it that it was at this gorge that a tiger, running away from his captors leapt acrossed the river and thus escaping successfully. Beau and Rob, whom I met at Kunming were planning to hike Tiger Leaping Gorge a day before me. However, since they missed the bus to TGL, they invited me to tag along.

I arrived at Lijiang early in the morning by the night train. The train was surprisingly empty and like most refurbished Chinese trains, it was clean and comfortable. Then from the station, I took one of the numerous minivans that were already waiting at the car park (Minivans are an economical way to get around in China. You decide your destination and the driver will only leave and all seats in the van are filled up.) to Lijiang’s bus station. Bougt a ticket to the beginning of the hike, Qiaotou village to meet my friends.

As we got closer to the gorge, the majestic peak of Jade Dragon Snow Mountain (玉龙雪山) slowly came to sight. Then, we caught a glimpse of the Yangtze River that was flowing through the gorge. Considering how wide the it was, the tiger in the legend must have had a trampoline to leap that far.

I left my backpack at a guesthouse in Qiaotou and brought only the necessities. Rob and Beau were already ready when I got there. We wasted no time and were joined at the start of the hike by Jason from the UK.

Perhaps I should tell you about the most difficult part of the hike – the 28 bends (It’s called bends because after one steep slope you would go onto the next slope on the opposite direction). Apparently it’s the highest and steepest point of the hike and many find difficulty in breathing at 3500m above sea level, where the air is considerably thinner.

The first hour of the hike was straight forward. We went through muddy roads and a few local villages. It all started well and I thought I wouldn’t have much problems but going into the 2nd hour, I was stopping more frequently to gasp for air. The feeling was all too familiar. I remember hiking Mt.Kinabalu few years ago, I had trouble with the thin air in the final portion of the journey and had to hike in a snail pace to the peak, which was 4095m above sea level.

The same happened in China as I got through one bend after another and going slower after every one. There were small shacks where local vendors sell drinks at inflated prices and invite you to take a rest. Or have some marijuana. Yes, weed to be sold to hikers. We ignored them and kept going. It was tougher but I felt we were almost at the end of the bends.

We soon arrived at a signboard that says “Start of the 28 bends”.

So much for being optimistic.

The bends were tougher than I thought and despite having a much lighter bag than my friends, I always fell behind. It wasn’t for the lack of stamina though but I had to slow down to make up for the lack of oxygen. Eventually we made it through the 28 bends. It was the highest point of the hike and the road later leads back to a much more manageable elevation.

That said, we were barely halfway. There was still a lot of walking and hiking to do.

After the bends, most of the trail was built along the gorge. Way, way, way down below to our right was the Yangtze River and on the top of it, it was the Jade Dragon Snow Mountain. If you don’t fancy hiking, you could take a bus to the scenic spot, take a few photos and then leave. In fact that’s what most people do. But it is through hiking and walking through the paths that I reckon you would fully appreciate how deep the gorge is and how large the mountain is.

We arrived at Halfway Guesthouse before the nightt ime and stayed for a night. The room was basic but was clean and came with a bed heater. We were joined by 2 Polish couples for dinner and after a few beers, we called it a night.

The thin walls of the guesthouse didn’t help to filter the noise made by a few inconsiderate Chinese travellers. The commotion revolved around a girl who thought that his male roommate/friend was being indecent for stripping down to his boxers to sleep.

Absolutely ridiculous, but everyone else were too tired to get out of their comfy blankets to give them a piece of mind.

The next day we descended to Tina’s Guesthouse in Middle Leaping Gorge, where most of us took a bus back to Lijiang. Beau and Rob took a bus further up to hike Haba Snow Mountain instead.

Before we returned, we took the chance to hike down to the base of the gorge. To descent to the base though, a local family has set up a booth to collect a so-called “maintenance fee”. However, we already paid the official entrance fee before we started the hike and the legitimacy of this booth is questionable. They put up a board with their story written to convince you that the government has abandoned this part of the gorge and it was up to the locals to maintain the path out of goodwill. Sounds like a load of bollocks but we wanted to get through so we paid up.

As the gorge was deep, the path down was steep and each step of the stairs were high. The locals have built an alternate steel ladder – dubbed the heavenly ladder – that has a length equivalent of 3 stories high. The ladder is placed at a almost-vertical 80 degree angle and although it’s sturdy, you will be climbing it with a vertigo-inducing view of the bottom of the river. We were hestitant to give a try and thus took the longer trail down.

The bottom of the gorge, I thought, was spectacular. The current of the water was powerful and came in large torrents. Sitting next to it makes you feel puny and humbled by the force of nature.

The hike back up to Tina’s Guesthouse was naturally a lot tougher than the descent. This time, we decided to try the ladder to save us some effort. While climbing it, I dared not look down at my feet. Although it didn’t feel like it when we were doing it, I now realize how scary it really was.

We returned to Tina’s and caught the bus back to Lijiang.

Before the hike, I was worried about altitude sickness as I have never spent a prolonged period at places with high elevation. Thankfully, my body responded well and I came out unscathed. My thigh muscles were completely sore the next day though, but it was worth it. It prepared me for much tougher hikes later in the trip. 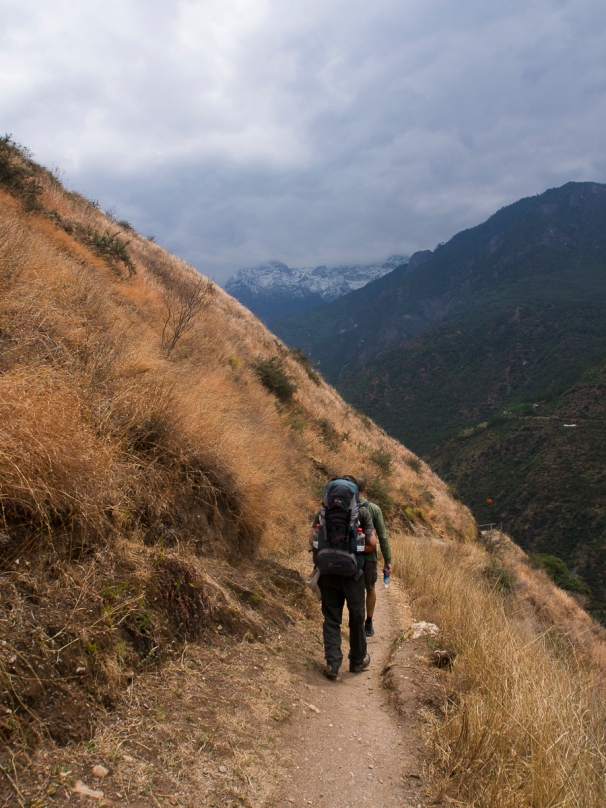 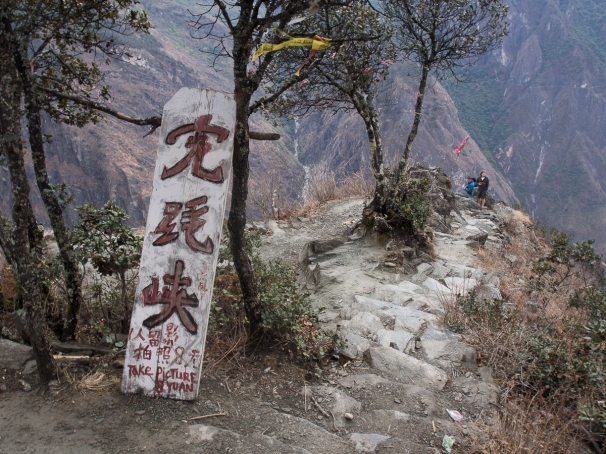 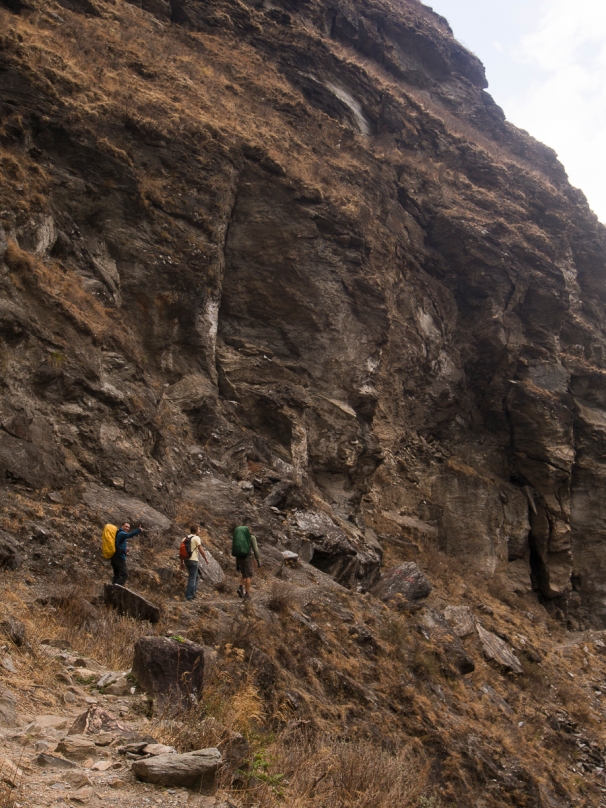 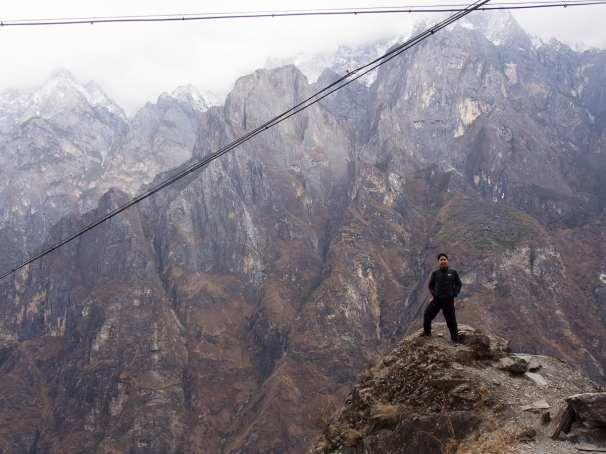 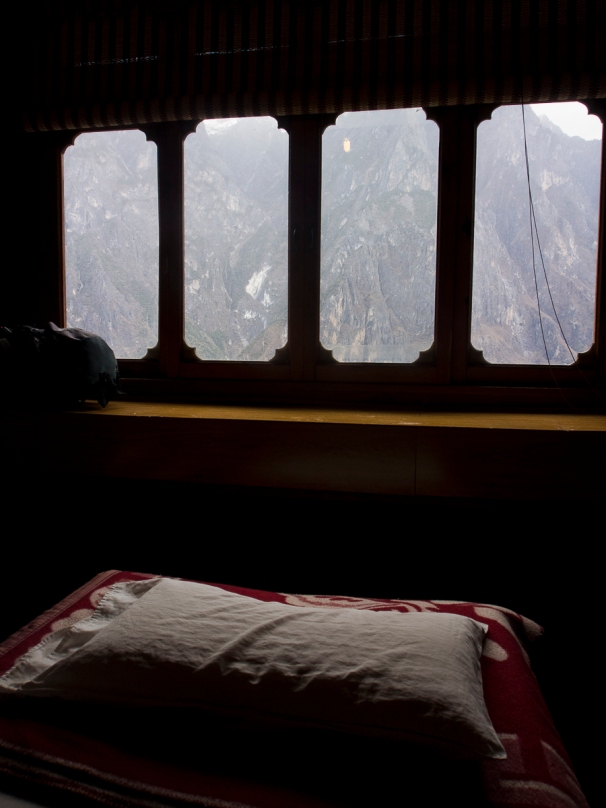 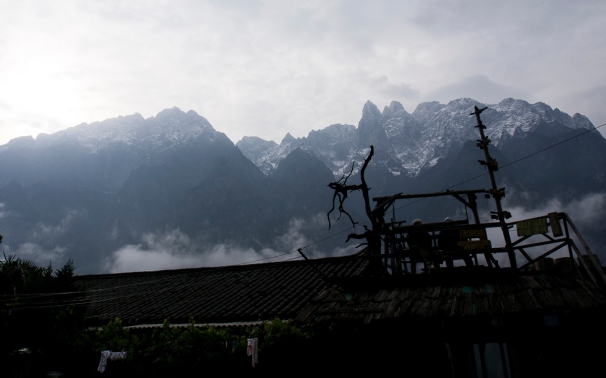 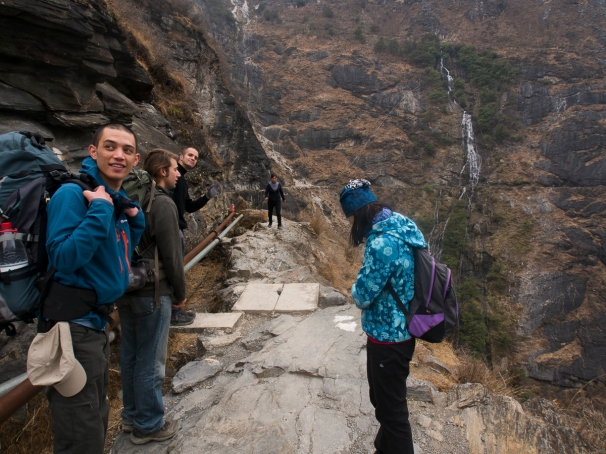 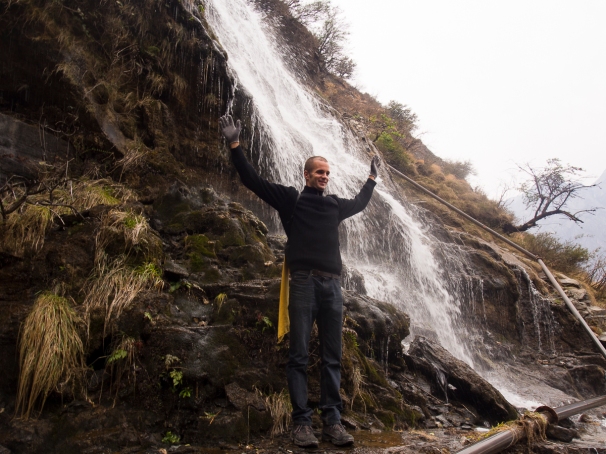 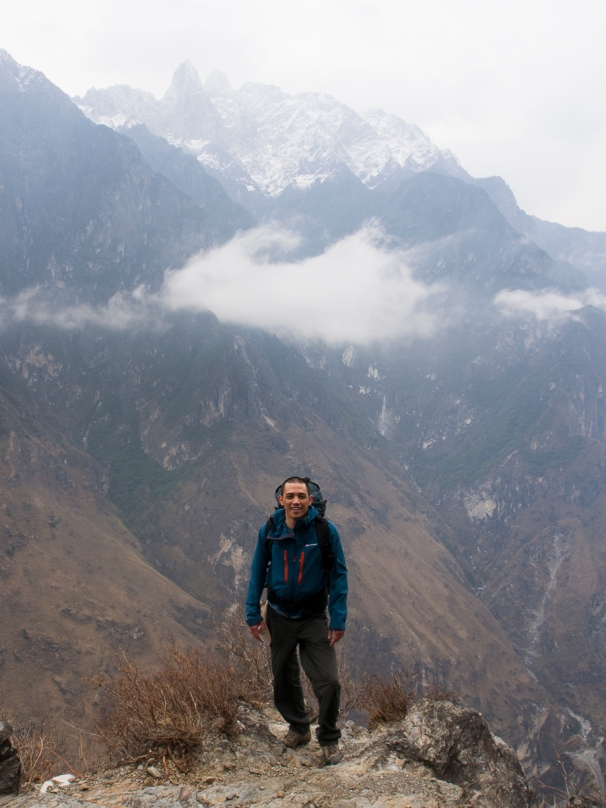 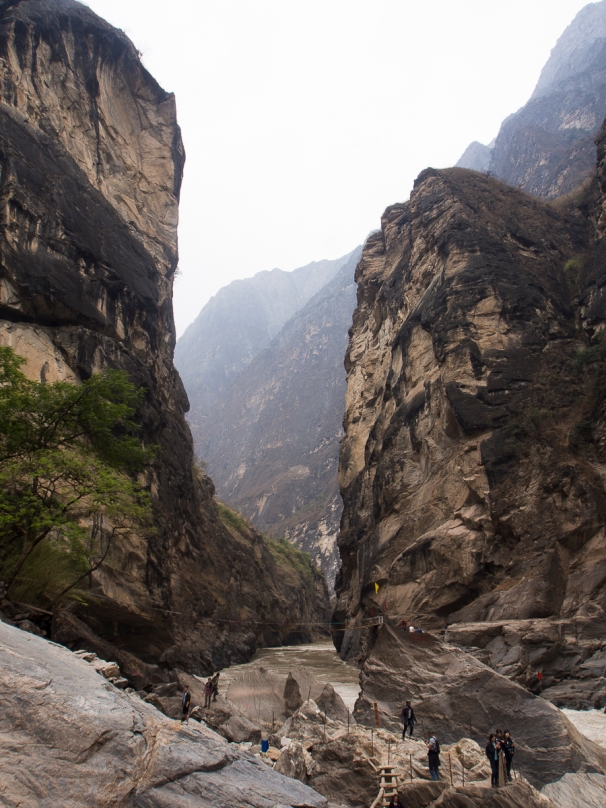 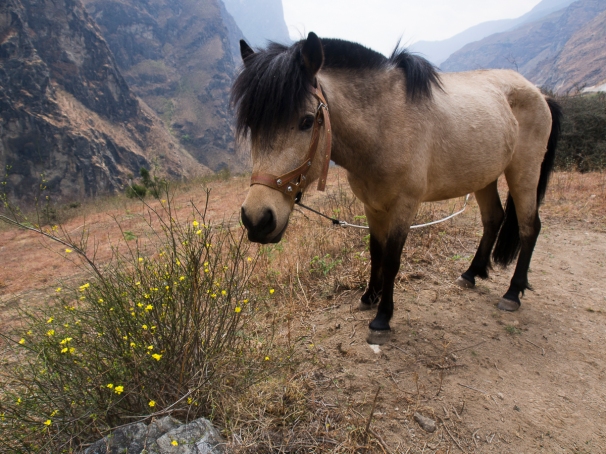 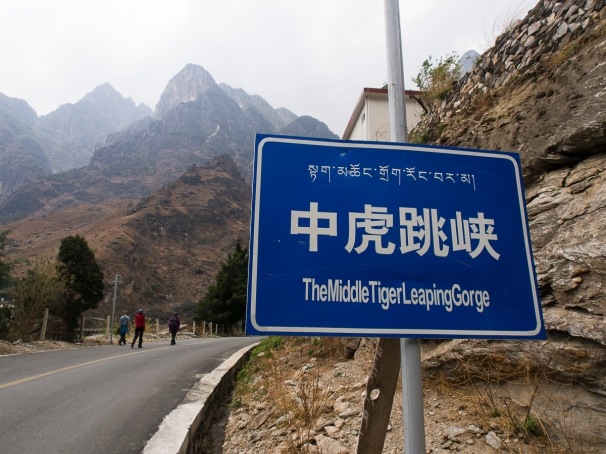