From Kampot, I was heading towards Can Tho, a city that’s located in the heart of the Mekong Delta in Vietnam. I booked a direct bus from a tour company in Kampot. The bus took us to the border, and we had get out of the bus to cross the border. The crossing was straight forward although it took a long time for the custom officers to process our passports, for whatever reasons. Once completed, we boarded the same bus.

However, instead of taking us to our final destination, we were dropped at the nearby town. We were told to wait for an hour or so before a second bus would take us further. One of the travellers seemed agitated and started complaining. He was heading to Ho Chi Minh City and still had a long distance to cover. Thing is, when you travel to developing countries, things like this happen. Rather than getting all stressed up for nothing, you might as well as go along with the flow.

An hour later, the minibus arrived and my backpack got strapped onto the roof by the driver. I know it’s a bit of a paranoia here but when you’re on the road, the backpack is your life. I’m not comfortable leaving it on top of a minibus but what other choice do I have? Once they got all the new luggages tied up, we finally left.

You would expect that the journey onwards be a straightforward one. It wasn’t. The roads in the Mekong Delta were narrow and bumpy. It was exacerbated by the fact that the driver was a speed demon. His foot was constantly on the gas. Always cutting queues along the way and slowing down only at the last minute. Basically it was cheap thrill for those who can’t afford to take a roller coaster. I joked to the Norwegian travellers next to me that by the time we arrive at our destination, the Kampot peppercorns that I bought would have been grinded into fine powder. In truth though, it was nauseatic.

The driver also seemed to be moonlighting as a courier officer. He made several lengthy stops on the way to pick up stuff after stuff and at some point, seafood! They were stored in the minibus’ actual luggage compartment, which was empty since our luggages are on the roof. Our backpacks were at the mercy of his driving skills and exposed to the weather just so he could deliver some cargos.

The agitated traveller that I spoke off earlier got really pissed off and started cursing loudly. At one stop he decided that he had enough. He and his wife got out of the bus and started shouting at the bus driver, “Why are we stopping?! Come on! Let’s go! Let’s go!” The driver pretended that he didn’t understand and just nodded.

We made another stop later and this time passengers heading towards Ho Chi Minh City were transferred to another bus. That was the last I saw the couple.

Eventually, we arrived at the outskirts of the town and there was a traffic jam. I started to hear faint cries from the front of the bus that sounded like a baby or a pet. I couldn’t make out what it was. When I exited the bus later, I noticed that it was actually a baby puppy sitting in a woman’s handbag. He looked terrified. Yes, even the dog is terrified of the ride. You know, the whole bus ride was just bizarre if you’re not used to this kind of thing.

So, how could I tell it was Vietnam and not Cambodia?

Well, first of all the buildings were larger and compact, the increase in population density is immediately noticeable, motorbikes dominate the streets and vehichle honks are music of the day. What else? The cone-shaped Vietnamese shape are still in fashion (I love them btw), coffeeshops with mini stools are at every corner of the street and people seem to find time out of their busy schedule to have small chats over a cuppa. Also, instead of tuk-tuks, you have Xe Oms here. They are motocycle taxis that are a cheap and convenient way to travel around town. Maybe not the safest at night though as there are reports of robberies.

Anyway, I arrived at Can Tho late in the evening and there were a few Xe Oms approaching us. I asked bne of them to take me to the a hotel I have researched before hand but he told me “No good, no good,”. Instead, I was brought to a rundown hotel.

“Cheap! Cheap!” he kept reassuring me. Sure, it was really cheap but I’m sure there are plenty of option if I look around. Anyway, I insisted that he took me to town and with a dejected look, he relented.

Another thing you should know about Vietnam is that outside of Ho Chi Minh City and Hanoi, there aren’t many dorms around. It’s strange considering the influx of backpackers over the years. Bear in mind however that in some places, hotels and guesthouses are cheaper than dorms. In Can Tho, I stayed in a nicer hotel than usual called Kim Long Hotel. It was clean and new, the staff were friendly. Although I was always watching my expenditure (These things add up, btw), USD$40 for a private room for 2 nights is a luxuy I could afford once in a while.

Can Tho was surprisingly developed. Then again, it shouldn’t be because it’s the 4th largest city in Vietnam.

I found out from Wikitravel/Wikivoyage that there was a small lane in Can Tho that locals like to go to for hotpot. After some searching, I found it and had a sit at the outlet that seemed to be more popular. After some finger pointing and body language gesture, I was served a large pot of duck broth and raw ingredients enough to feed a whole family. I’m not sure how it works, perhaps they would charge you only for the stuff you eat.

The hotpot itself wasn’t great (Trust me, there are really good hotpots in Malaysia) but what was intriguing was the egg they gave me. In Malaysia, we tend to keep the egg for the end as once we crack the egg into the soup, it would ruin the broth. So, that’s what I did. I saved the best for last. When I was ready, I started cracking the egg. The egg seemed harder than usual so I tried knocking on the table harder. It still didn’t crack. Some of shell peeled off to reveal a white layer inside.

Strange, why would they serve a hard-boiled egg for a hotpot dinner? Out of curiosity, I used my chopsticks to poke onto the white layer. The chopsticks went through the layer easily but beneath that layer, the egg was half-empty.

Perplexed by what I saw, I took a closer look into the shell.

On the bottom was a lump of what looked like muscle tissues. Yes, musscle tissues in red with barely grown feathers. There was a thin layer of blood inside and worst of all, the thing was faintly beating! The thing was half-alive!

It wasn’t an egg. It was a BALUT! It was a duck embryo!

I remember few years ago, a Vietnamese friend of mine brought me for a hotpot dinner and showed me how to eat pig brains. I tried but I didn’t like it at all. It was revolting, but at least I was mentally prepared.

This balut, on the other hand, I wasn’t!

“Oh well, I was full anyway,”  I thought to myself as I put the balut away, paid up and left. Blood started dripping onto the plate already. Poor thing.

Vietnamese food isn’t all about the exotics though.

One morning, I made a visit to the nearby market. As usual, I went over to the food section. One particular stall caught my eye, where the vendor was selling grilled pork chop with broken rice (Com Tam Suon Nuong). The aroma from the lemongrass marinated pork chop was alluring. I pointed at the pork chop and rice, which was understood by her. I waited a little while as the lady grilled the meat. Once done, she served it on a place of rice with a bowl of fish sauce. I cut a chunk of meat, lightly dipped it into the sauce and then took a bite. The meat was succulent, full of flavour and had a slight charred finish. No matter where you are in the world, whether it costs a measly USD$1 or more, whenever pork is done right, it’s heavenly.

Yes, I can’t be mistaken. This is Vietnam. 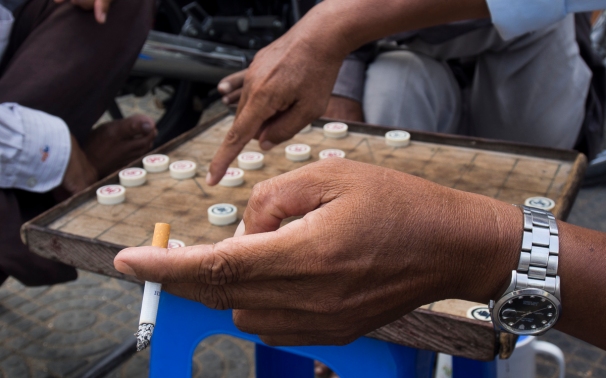 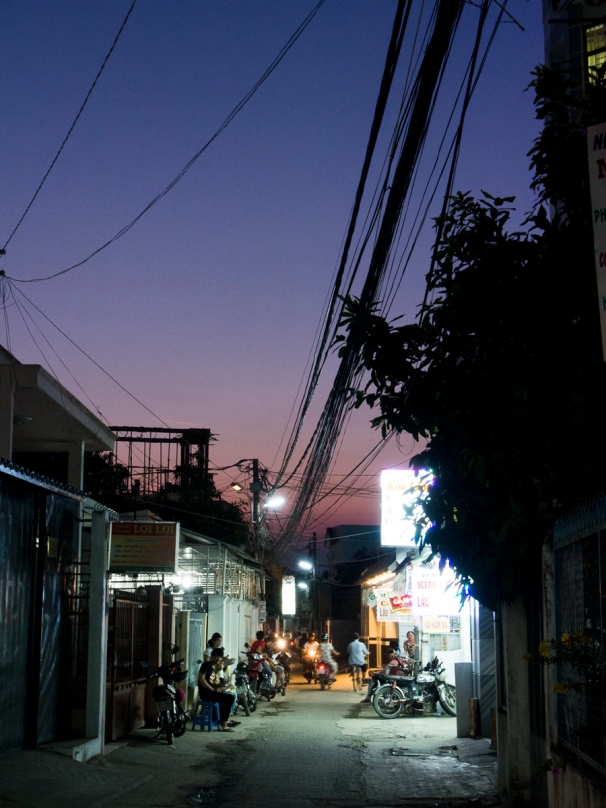