***Warning: Excessive amount of the Red Colour ahead. If you’re in any way allergic to Red, or are supporters of a certain red team from Manchester, proceed at your own risk. =D***

To most Liverpool fans in Malaysia, watching a match in Anfield has always been a dream. Knowing the strong fanbase here, Liverpool FC decided to embarked on an Asia Tour this year to give fans a glimpse of the Anfield dream.  It was Liverpool’s maiden visit here, and I made it a point not to miss it and what an occasion it turned out to be.  The fact that Liverpool FC has a huge fanbase in Malaysia is proven by the 80,000-odd crowd at Bukit Jalil Stadium on the 16th of July, 2011.

We arrived at the stadium at around 2pm, about 4 hours before the match started. Having through the awful traffic jam during the training session (Which was attended by 38,000 fans no less!), we decided to park our cars at Kelana Jaya and took the LRT. The gates were yet to opened but there were heaps of Kopites waiting outside of the stadium already. Fans were seen singing, taking photographs with the banners and basically having a good time. 2 FRU (Federal Reserve Unit) trucks were seen driving into the car park, which was greeted with jeers from fans who are still feeling distaste for the treatment they gave to the peaceful protesters 2 weeks ago.

Nevertheless, songs such as Fields of Anfield Road, Team of Carraghers and When The Reds Go Marching In echo around the Green Gate. Even Luis Suarez’s Can’t Get Enough was sung for a brief moment. For a moment, the sky threatened to rain but even if a cloudburst were to occur, it never looked like it would dampen our spirit.

When the gates finally opened, many of us marched (Read: Rushed) into the stadium. While the early gloomy sky is replaced by the striking sunlight, time flew by pretty quickly as the was no short of events happening around. Songs continued to be sung, flags were waved about, Mexican waves were seen rotating around the stadium and a giant jersey replica were flung around the fans. Prior to the match, a few fans in a local forum was worried that the organizer might not play our anthem You’ll Never Walk Alone, however all were rest assured when the famous tune was belted from the sub-par PA. The sound quality didn’t matter as the fans were always going to be on top of it. Come to think of it, the Sun was killing that day but the adrenaline rush made it insignificant. 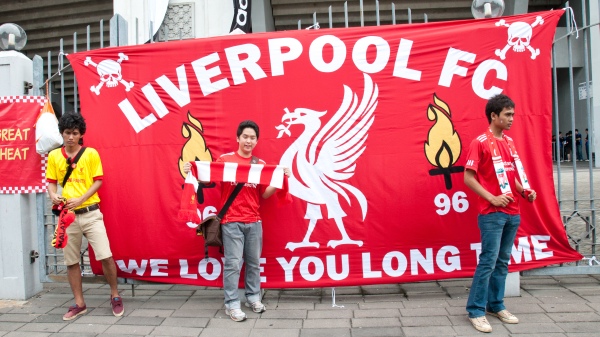 By 4’o clock plus, some of the Malaysian coaching staff could be seen entering the field, much to the crowd’s pleasure. The National Team coach Dato’ K. Rajagopal made his entrance, which was met with a standing ovation from the Liverpool fans, obviously appreciating what he has done for the national team thus far. (Contrary to his post-match comments) One by one, the national team players could be seen entering the field, with the Liverpool players joining the warm-up session. Like an army of red ants, fans suddenly appeared out of nowhere to fill out the empty seats. Chants around the stadium doubled their volume. It was an hour to kick-off and the fans are getting restless already. The starting lineup was then announced and much to delight of fans, it was a strong one from the Merseyside team, consisting of superstar players like Andy Carroll, Raul Meireles, Jamie Carragher and Daniel Agger.

As if we’ve waited a lifetime for it, the kick-off began to roars from the fans, cheering on the players who don the classic Liverpool red. The national team, dressed in their blue “lucky charm” away kit, received an equal support. Though, neither team did well enough to get ahead of the other and despite one team losing the possession, the other failed to capitalize on it. The deadlock was finally broken when Andy Carroll fell on the opponent’s penalty box, resulting a penalty being awarded by the referee. Many claimed that he dived, but it was secondary when Charlie Adam slotted the penalty home. As if the drama wasn’t enough, the referee instructed a retake of the penalty due to an infringement, which Adam calmly fired the shot to a different direction. The Malaysian players probably felt undeserving of score, quickly wiped up the Reds’ lead when they were awarded a free kick outside the box. Safiq Rahim fired a beautiful curling shot over the wall which ended on left side of the net, leaving goalkeeper Brad Jones no chance to save it. The rest of the first half however, was marred by sloppy playing, Liverpool’s front four failing to click together. It wasn’t the best of starts, even for a friendly.

The second half soon begun with the entire Liverpool team replaced. Notable players were returning from loan Alberto Aquilani and Emiliano Insua, as well as the Duracell Dirk Kuyt, Maxi Rodriguez and David N’gog. Thankfully, the 2nd half was much better and free-flowing, with the impressive Aquilani dictating the midfield play. Missing in the first half was a player in the midfield spreading the ball forward, feeding the forwards with lovely chances. A beautiful chip from Aquilani which saw N’gog chasing and shot wide early in the match was a sign of what to come. The goal eventually came when the Malaysian players fumbled a cross from Insua and saw N’gog tapping in the ball. N’gog then doubled his lead with a Torres-eque finish while Maxi made it 4 when connected with Insua’s cross. Aquaman was involved in both goals.

The National Team looked like far from salvaging the game, however the support from the crowd could still be heard. Eventually, they capitalize a mistake by goalkeeper Peter Gulacsi. The scorer, Safee Sali (Who is currently playing for Indo side Pelita Jaya) doubled his tally when he slot in a lovely goal. The National Team looked like they were getting away with a respectable score, however conceded again in 90 minutes when Kuyt delivered a cross to an unmarked Maxi. Kuyt later scored one deep into stoppage time by linking up with Aquilani. It must have been frustrating for the National Team to concede at a time like this, however no one in the stadium would doubt the dedication and belief the Malaysian players put in the match. Hats off to both team for the entertaining match. 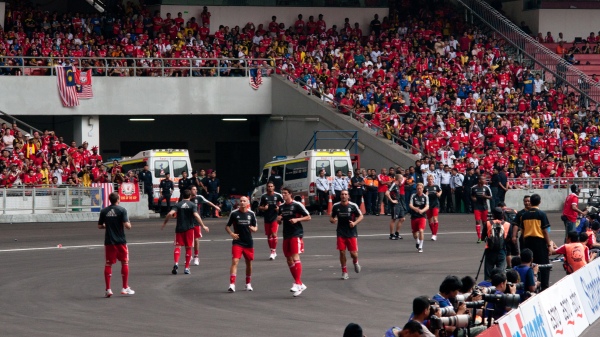 The final whistle was blown and players made their bow to a standing ovation from the crowd. You’ll Never Walk Alone was played for the last time, with the 80,000-odd fans in the stadium delivering a goosebump-inducing rendition. It was hard to believe that the match was finally over and we had to bid farewell to the team. The night should have never ended. With the other fans, we made our way out of the stadium.

A confession – it was my first live football match and it was more than a memorable one. Although a lot of players I hoped to see weren’t here this time, (Lucas, Reina, Suarez, Gerrard) the spirits shown by the Malaysian fans really made up for that. Whilst I’m sure it would never beat the feeling of being at Anfield on a classic European night or even a regular BPL fixture, it was the closest most of us could come to. Whilst I continue dreaming of the day of making it to the Kop End on match day, in the meantime I could only hope that the team make its second visit to Malaysia in the near future.

A compilation of videos I’ve taken throughout the day: