We woke up early on the second day and headed to the reception (Which occupies another room that is similar to our dorm) for breakfast. If you are wondering which accommodation we stayed in from my previous post, it is actually called Hongdae Guesthouse, situated above Hongik Subway Station. Much of our disappointments described in the earlier post was forgotten as the owner/staff Henry was very very friendly and chatty. He remembered that we wanted to see the Nanta show and tried all his means to get us discounted tickets. Even though in the end he couldn’t make the reservation, we really appreciated the effort he made to get the best deals. We then told Henry that we wanted to try the famous baby octopus/sannakji at Noryangjin Market. He said he has tried it once and that one-time experience was enough for him. The octopus tentacles would be squirming and trying to stick onto your mouth even though they have been sliced before serving. He asked to take some videos at Noryangjin for him unfortunately, he wasn’t in when we checked out the following day. Come to think of it now, I actually miss his warmth and hospitality.

Before we left, Henry asked us to borrow his umbrellas as it was drizzling outside. We took one and declined to borrow another, to which he said “Ohhh… you want to be closer,” =D

Our first stop is the Noryangjin Fish Market. Now, this is a place where you have to experience it for yourself and no photos or videos in the Internet could describe it enough. It’s basically a market with stalls after stalls of fresh seafood and its specialty lies not just in its common fishes, but rather exotic ones such as live octopus (Huge adults and babies alike), abalone, sea cucumbers and oysters etc. Whilst these traders sell their captures to restaurants and families, there are also restaurants behind the market to cater to those who want to consume on the spot.

Ordering couldn’t be simpler enough even for a foreigner – pick a stall and then point at whatever seafood you like. The fishmonger would then bring you to the restaurant. We chose a stall where the aunty speaks mandarin and ordered sannakji, prawns as well as a whole fish for sashimi. The fish was bought from the next stall where they would slice . She then brought us to one of the restaurants behind.

The sannakji came to the table almost immediately, chopped. The tentacles was still wiggling about on the plate and it wasn’t a sight for the faint-hearted. So, how did it taste? Actually like most sashimi, the taste was bland and the texture is similar to a squid. Once in your mouth you could feel the tentacles squirming and sticking to the roof. It was a fun experience and we actually liked it as it is really fresh. The sashimi served on the other hand was more chewy than what you get with Japanese ones while the prawns, barbecued was very juicy. The maeuntang, which was a spicy hot pot cooked with the leftover bones from the fish was a contrast to the cold dishes and was the perfect antidote to the cold weather.

Oh, did I mention that the restaurant was packed with Korean customers? The table next to us was seated by an elder couple who initially were intimidating as they were furious by the restaurant’s service quality. It turns out that they are actually a friendly bunch. They spotted us eating the raw vegetable that was placed underneath the sashimi and warned us not to do so as most of the cabbages were kept and re-used. The uncle – who was a little tipsy – the went on and on in Korean, much to our bewilderment. Before we left, we had some Korean Wine/soju left we couldn’t finished. Megasari then decided to serve it to the elder couple. As a return gesture, the uncle treated us to a bottle of coke and gave us a toast.

It was in Korean, but I believe he was welcoming us to Korea. Such warmth and generosity. 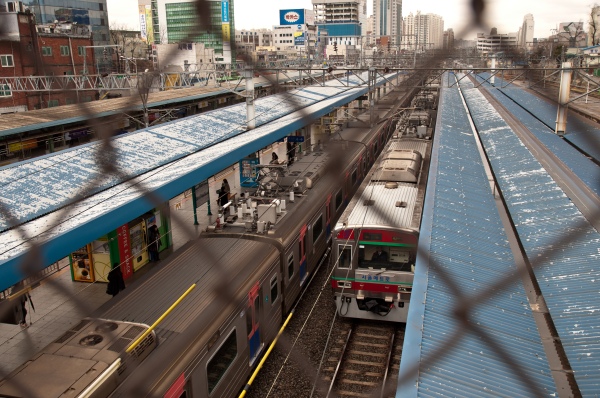 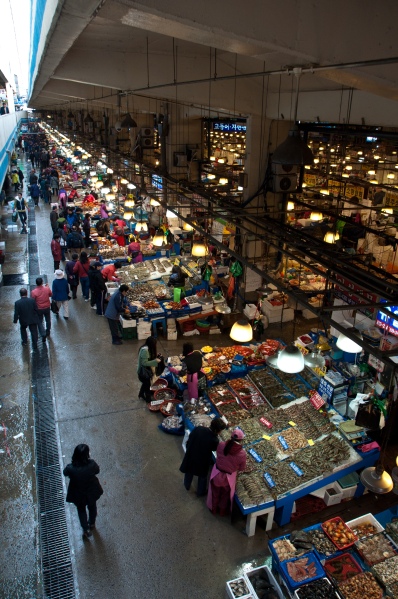 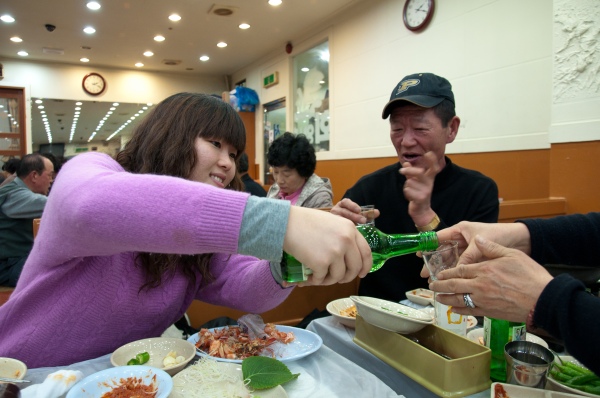 Our next destination was the Korean War Memorial, which was a museum that documents all wars that the Koreans have been involved in. Now, I know people tend to skip museums in their itinerary but this one is special. On the surrounding area of the memorial is a vast outdoor exhibition area, filled with many combat vehicles from the WWII era. Perhaps the most interesting part of the lot is the Korean War section, which provides an insight on how the North/South Korean divisions were formed. It’s sad to learn that the Koreas are separated by an ideology and recent events have strained the relationship even further. The monument – where a South Korean soldier embraces his North Korean brother – further depict the feeling of helplessness. Try to include this into your itinerary. 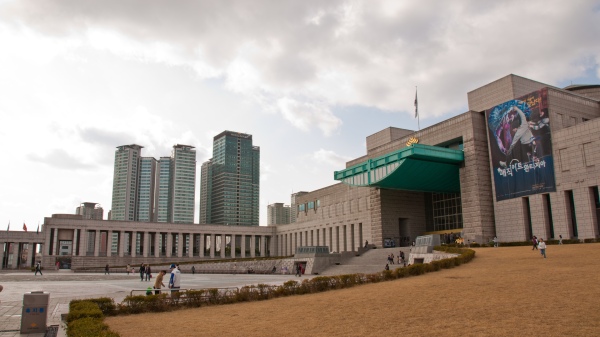 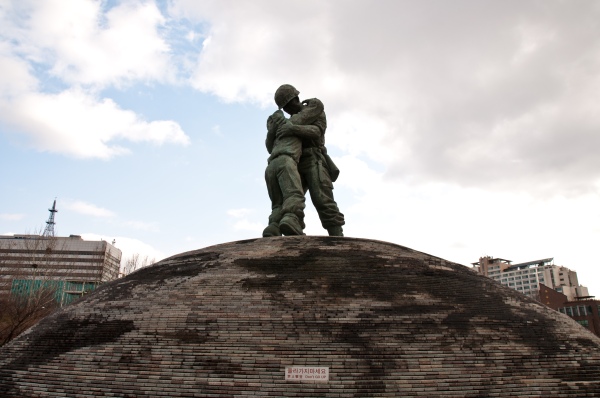 Situated at the top of Namsan, you are able to get a panorama view of Seoul City from the N Tower Observation Deck. We decided not to go up the tower as the price of admission was quite expensive (In addition to the cable car ride to the observation deck) and in fact, you could get a good view from the deck already. What’s interesting about the deck though is that on its hand railings, you will find countless padlocks. Couples all the world would bring their own padlock and lock it on the railing as a symbol of long-lasting love, often inscribed with messages. It’s an unique sight but sadly, we didn’t bring ours.

We wanted to check out the Namdaemun Market, which was famous for its street market (Not unlike Petaling Street in KL) but as we got there, most stalls were closing. What’s left were the stalls selling Korean street food. We decided to pop into one of the stalls for dinner. You could find various Korean staple snacks here, such as the Spicy Rice Cake/Dukboki which was slightly sweet and spicy and some BBQ skewers. The highlight of that evening though was the Korean Fried Noodle/Japchae, fried with some chicken cubes.

You could find these street stalls everywhere in Seoul and if you’re there, do make it a point to try the snacks above. The Korean locals, from what we observed, usually eat these snacks with soju. 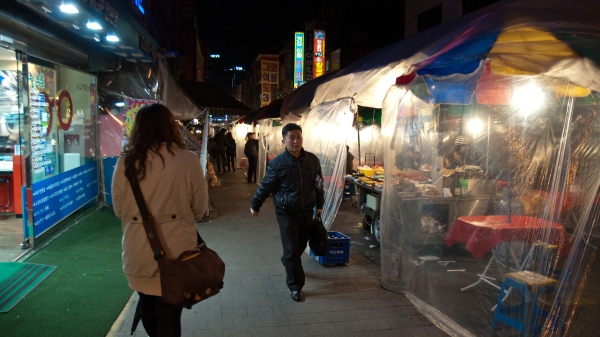 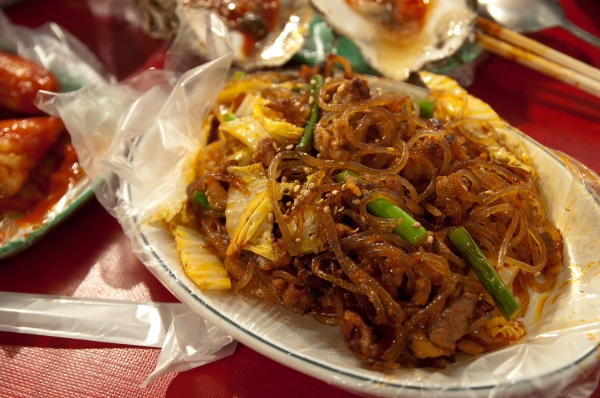