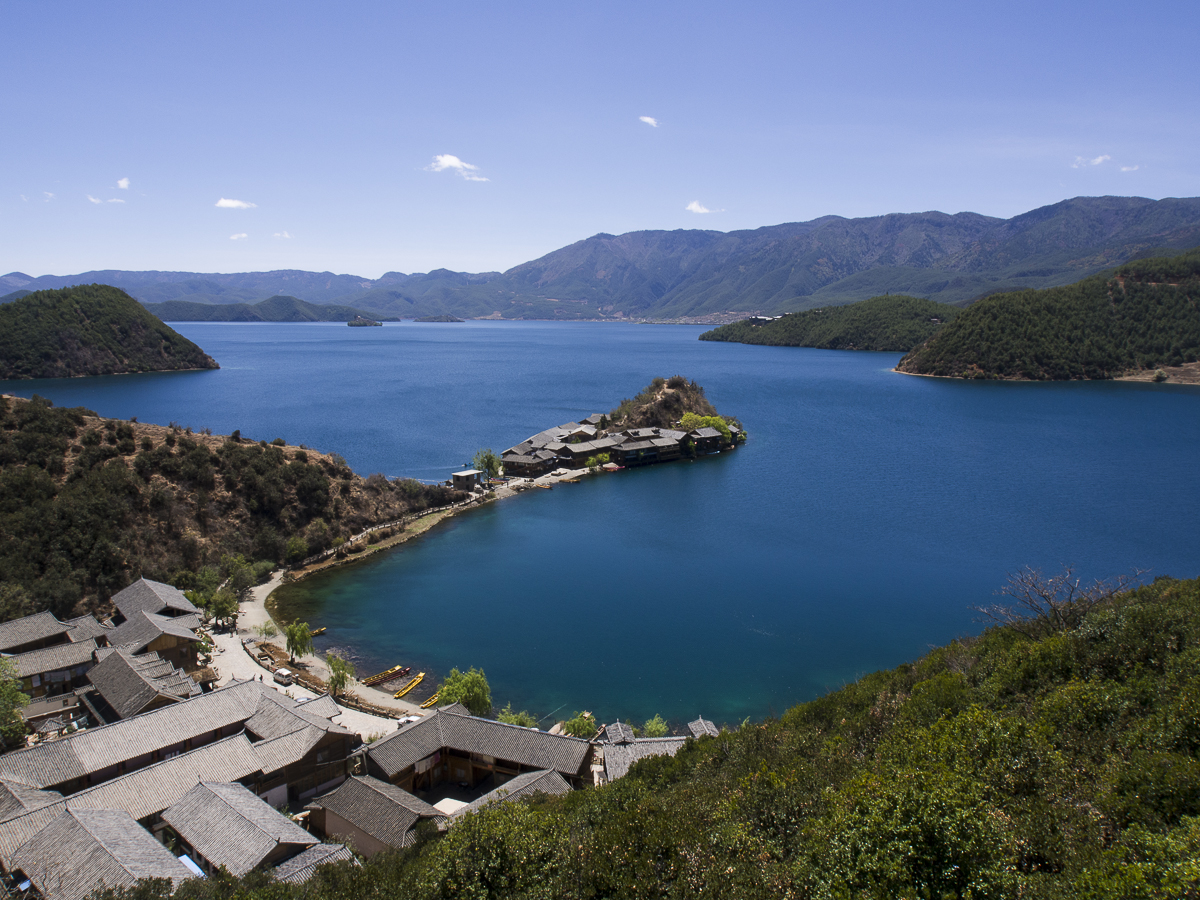 The clear blue skies and clear turqoise water. Those were what I was looking for when I headed to Lugu Lake (泸沽湖), an alpine lake sitting at an elevation of 2600+m above sea level and is the highest lake in Yunnan province. The interesting thing about the bus ride from Lijiang is that it would actually stop at a couple of scenic spots for photo taking. It’s a privately operated bus, which means the driver doesn’t have any incentive to do so. Still, I appreciated the gesture as the journey some really beautiful lakes. At one point, there was one that reflected the scenery like a mirror (Something like the photo below, but even clearer.)

I felt like I was being transported to a different world.

Having that said, expectations can make or break a place. Imagine after making some promising stops along the way and arriving at what looked like an ordinary lake. Sure, it was peaceful but the water wasn’t the sky blue translucent that one would expect. So much so that I thought I was at the wrong place.

Though, what surprised me was how much a role that the sky and clouds play in the colour of the lake. The first day, the weather was cloudy and gloomy.

When I got out of the hostel the following day though, I thought I woke up in a different place. The sky was clear and probably one of the bluest I’ve seen. And the lake? I’ll let the following pictures do the talking:

Indeed, it was the blue paradise I was looking for. I rented a bicycle and planned to cycle and circle the lake as much as I could. I joined another 3 Chinese travellers (2 from Fujian, one from Sichuan) who were circling the lake from a different village. It struck me how friendly the young Chinese travellers are. I was merely asking for direction when one of them shouted, “Come! Join us! We shall cycle in a group of 4s”

While certain ascending slopes of the road was difficult at a high altitude, whenever it’s going down we let the brakes loose and screamed excitely as the cool breeze hits our faces. We stop only to take photos at scenic spots, which is quite a lot.

We were later joined by a group from Guangzhou. The funniest part was the mandarin accent of one of the girls. People who live in the Canton region don’t usually speak mandarin as much as Cantonese, hence they have this funny mandarin accent, which often gives away their place of origin. Sometimes, Chinese travellers ask if I’m from Guangzhou, which I guess isn’t as bad as “Are you from Hong Kong?” where people speak even less mandarin.

Alas, the place I stayed at was about 2 hours away from their place and if I were to circle the entire lake with them, I wouldn’t have made it home in time. After a couple hours, I said goodbye to my new friends and headed back alone.

Most of the locals are of Mosuo origins. In order to market the attraction to Chinese tourists, Lugu Lake is often called the Kingdom of Women. The reason being marriage in the Mosuo culture is not permanent and women are often allowed to change their husbands as they see fit. In reality, the women are not as promiscuous as outsiders would think. Although people from the modern world may find this a quaint practice, it won’t be a surprise if such a custom is still being practiced today. In fact, when I visited a local barbeque outlet, the young Mosuo lady introduced me to his “brothers” and claimed that “we’re a one big family” (我们是一家人). Maybe I’m overthinking it, but sometimes it could mean that two brothers are sharing one wife.

While I was having my dinner there, the local guy told me there was an evening bonfire organized by the Mosuo locals. So when it’s about time to start, I followed where everybody went and it led me to the venue. A small fee was collected at the entrance and then we were seated around courtyard, surrounding the bonfire in the middle. Locals dressed up in traditional Mosuo costume entered the stage. The guys were in funky and colourful long sleeves with a cowboy hat while the women’s costumes are best described as a combination of Chinese and ethic minorities of North Vietnam. The emcee started the playing the flute and the rest of them circled the bonfire, sang and danced to the tune.

Once they were done, the emcee invited us to join them to sing. What supposedly felt exciting turned into a mind boggling one when the emcee started singing some popular Chinese pop tunes. It didn’t matter much though, we had a fun time outsinging each other.

After so many days at Lijiang, it was refreshing to return to nature and to a place where there’s relatively less people. On a good day, the lake is the most beautiful one I’ve seen. Definitely worth the 10-hour detour from Lijiang.

If you want to visit this place, I would recommend spending 1 or 2 nights. The best way to get around Lugu Lake is to circling the lake by bicycle. If you start early, you should be able to finish the route by evening. If cycling doesn’t appeal to you, you could always rent a minivan. Either way, you will have a great time at the lake. Just make sure you check the weather forecast before visiting. 😉 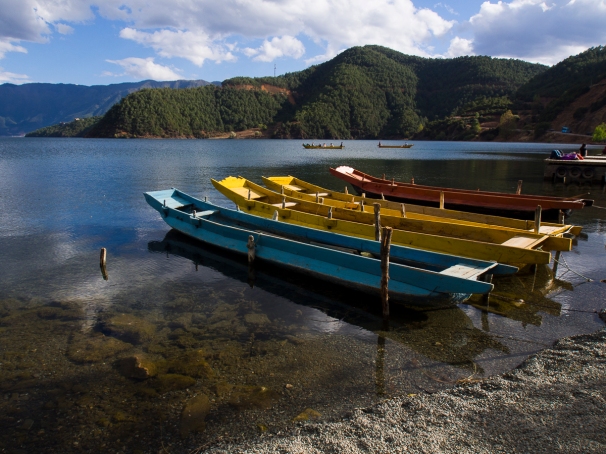 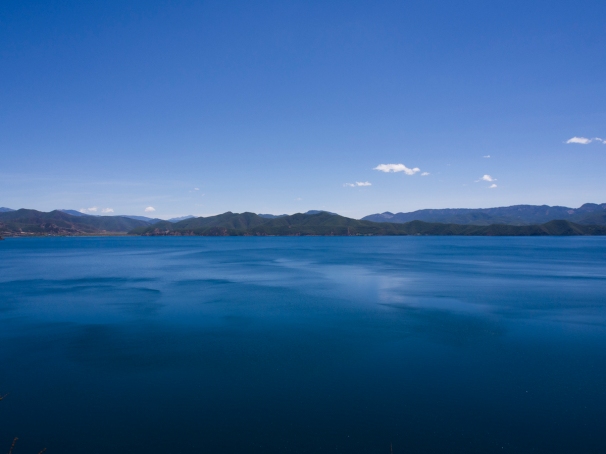 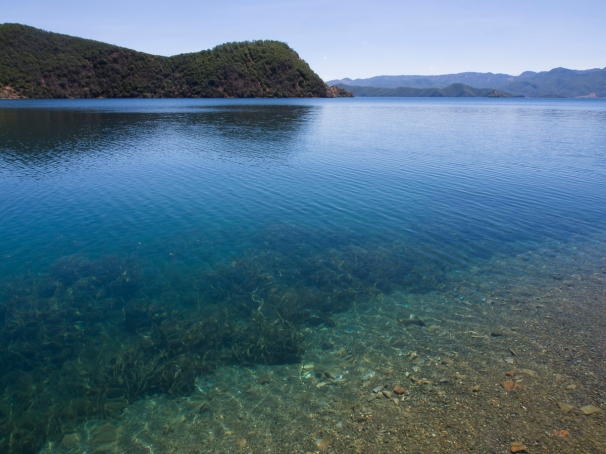