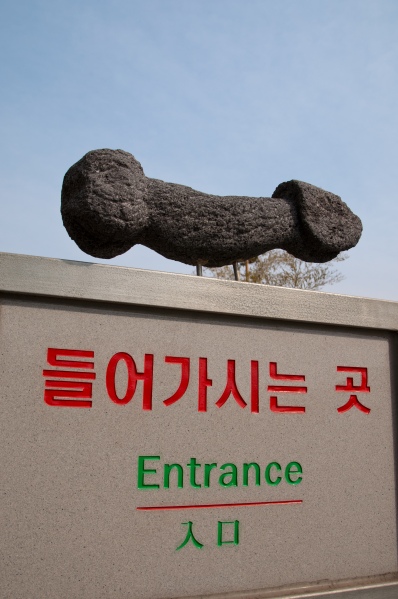 Our last day at Jeju was the most fun we had. Sylvia booked us a taxi tour that took us to the West side of the island. There are actually more attractions to cover in the west, as compared to the east. As our flight back to Seoul was scheduled at 6pm, we only picked the ones that were interesting.

The night before we left, Sylvia gave us paper and a set of colour pencil to design our own comments, which would be pasted on the guest house’s wall. If you happened to come across a comment from Xien & Cindy from Malaysia & Indonesia, that’ll be us! 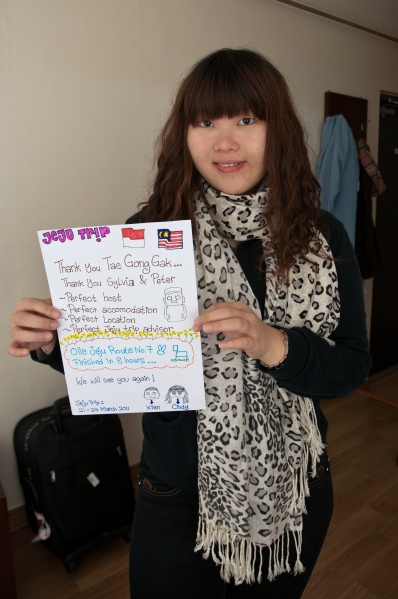 After we checked out from the hotel, Sylvia introduced us to our friendly taxi driver, Mr. Koh:

Our first 2 destinations were the Yakcheon Temple and Jusang Jeolidae. The former is a Buddhist temple located not far away from Seogwipo town. Interestingly, the structure and interior of these temples are not dissimilar from the ones in Malaysia. According to Sylvia,there will be a daily prayer held in the evening by local monks.

Our next stop was the Jusang Jeolidae, which apparently were pillar-shaped points of Mt. Mudeungsan. There we came across a woman diver who was selling alive seafood. In case you didn’t know the impressive story of these Jeju divers, they would dive into the sea without any diving equipment to capture marine products, which would be sold later to support their family. What’s more impressive is that even without any breathing aid, they could stay underwater for about 2 minutes. The woman divers that we came across are typically in their 30s to 50s,  which puts us youngsters to shame. 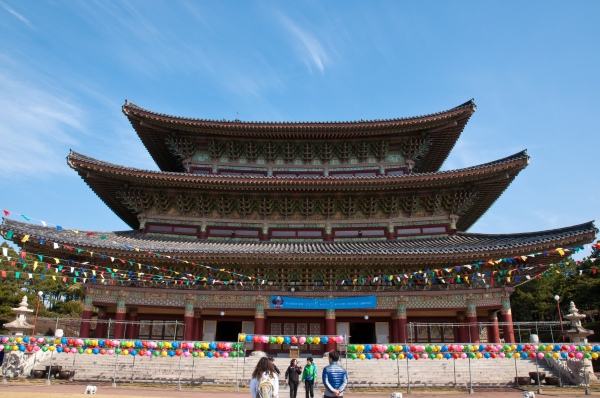 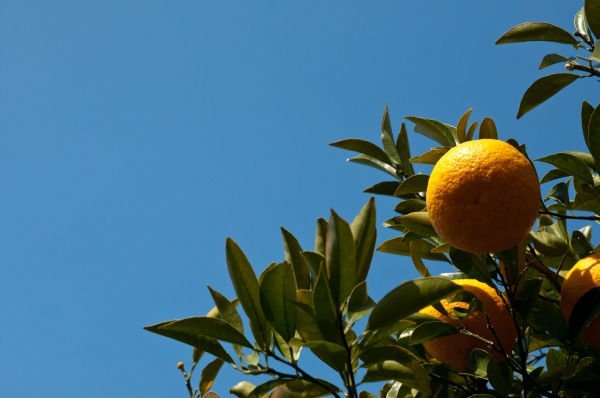 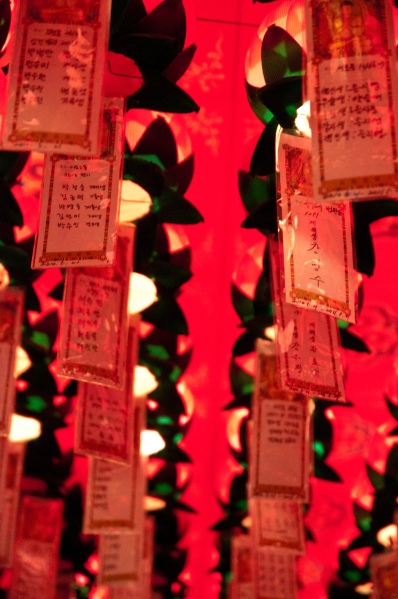 Our 3rd stop, much to Megasari’s delight was the Teddy Bear Museum. Entrance fee was slightly expensive, but the museum had a large variety of teddy bears in its exhibition. Framed in glasses, these Teddys were dressed up and decorated to mirror events and cultures of the world. There was a section that was dedicated to the history of teddy bears. 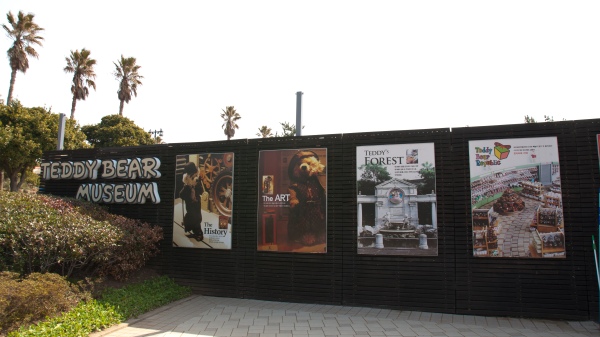 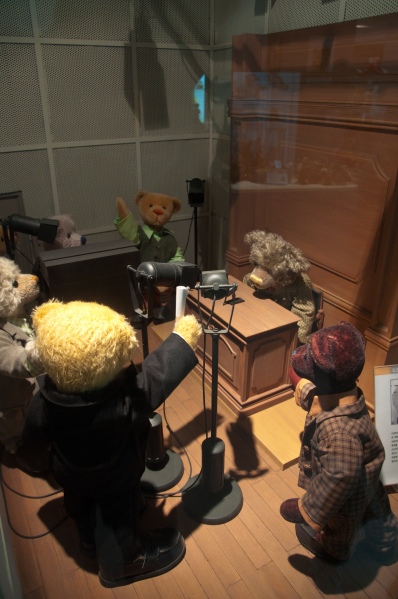 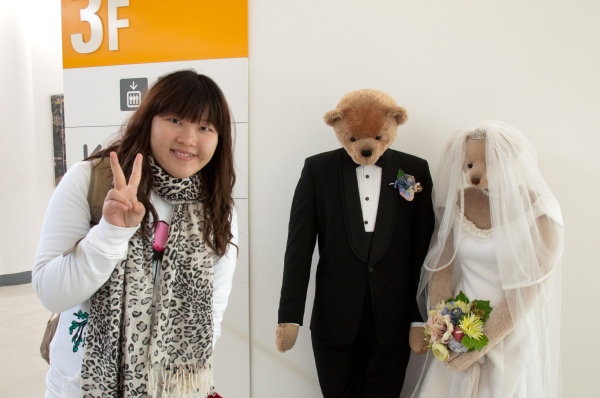 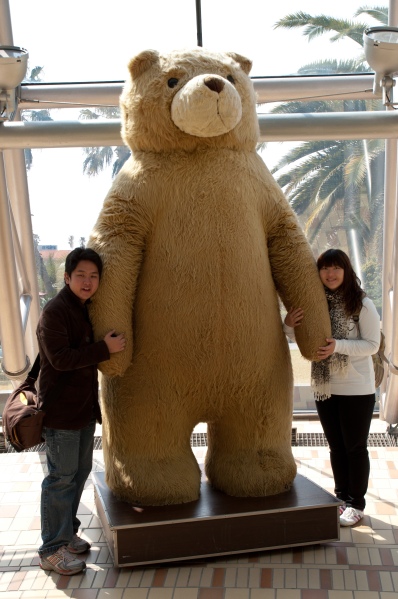 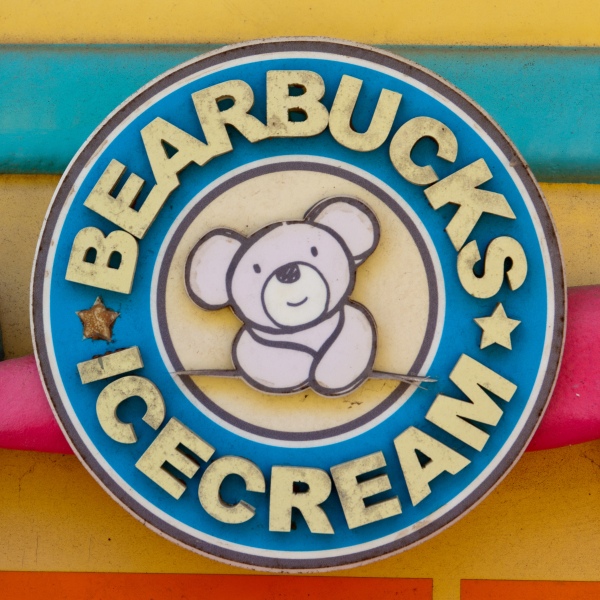 As we were pretty much sick of barbecue that day, we specially requested for some local noodles. Mr.Koh then brought us to a restaurant whose specialty were handmade noodles with clams. I personally prefer handmade noodles like La Mian and Soba as there is a certain freshness in it that packeted ones could never get. True enough, not only the food was cheap, the noodles were fresh and chewy. The clams were fresh and went well with the sweet broth. Even the kimchi and glutinous rice donuts (Yup, they sell donuts as well) were delicious. The only minor complaint we had was that the portion was really huge.

I’m not entirely sure where the restaurant is (If I’m not mistaken, it’s down the main road from the Shilla/Teddy Bear Museum), perhaps you could write down the Hangeul name and present it to a local when you’re there. 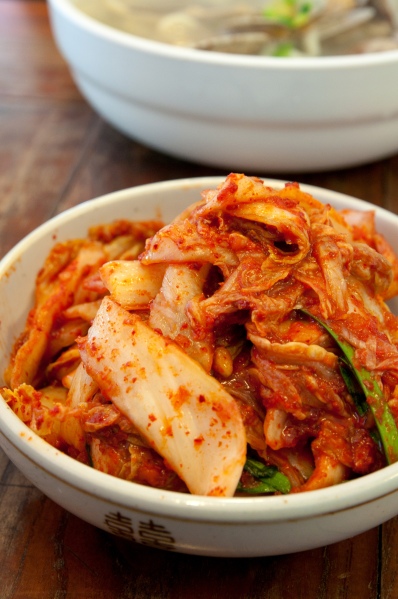 The Yongmeori Cliffs are somewhat a wonder of Jeju as its natural stack of rocks look like they are lifted from the middle east. In the second photo below, you could see the Sanbang Mountain in the background, which if you have the time, could attempt to hike. Other attractions around the area include a replica of the 17th century dutch ship (Inspired by events where a dutch explorer discovered Korea and was capture by the Joseon government) and horse riding activities.

Here’s a compilation video of the Yongmeori Cliffs (As well as the Jeju Olle 7 taken a day before). Excuse the jerky video.

The O’Sulloc Tea Museum was slightly disappointing (We forgo the Glass Museum which although was highly recommended by Sylvia, would take us a long time), though they had a cafe that served a wide variety of tea-based food/drink products. We heard that Green Tea Ice-Cream was good, so we bought one for each of us. Priced at 4,000won (RM11) it’s certainly not cheap but the dessert is SSOOOOO tasty and creamy without being too sweet. Can we bring this to Malaysia???!!!

Our final stops – The Mysterious Road and Love Land are actually located near Jeju Town. Mysterious Road is an interesting one. Let’s say if you park your car on a slope and release your handbrake, logically your car should move towards the foot of the slope. However, it doesn’t happen in this case (Hence the name), check out the video below (You could hear Mr.Koh saying “It’s an optical illusion” xD):

Our last attraction at Jeju was one of its kind. The Love Land is a sex-themed sculpture park that was opened a few years ago. Now, this is a place where you should leave your children behind as although some of the sculptures are funny and subtle, a lot of them depicts some outrageous sexual positions. Sex education this is not. But between you and your open-minded friends, you’ll definitely find lots of laughter.

On a side note, there were a bunch of old ladies who were amused by the self-pleasure bicycle in the park. They couldn’t stop laughing when they rode the bicycle. Perhaps – if you’re a girl – you ought to give it a try when you’re there. xD 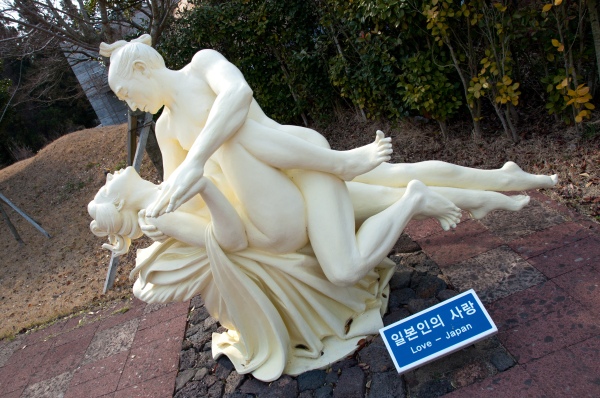 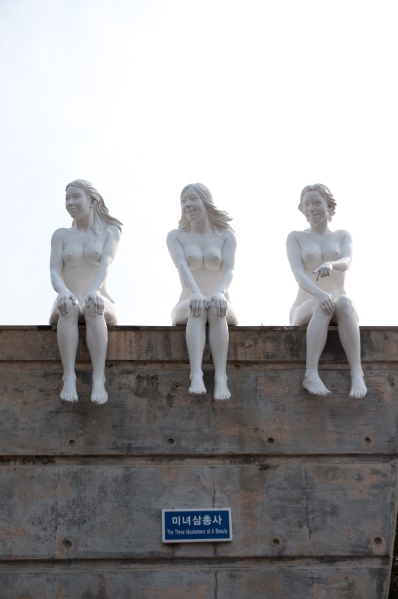 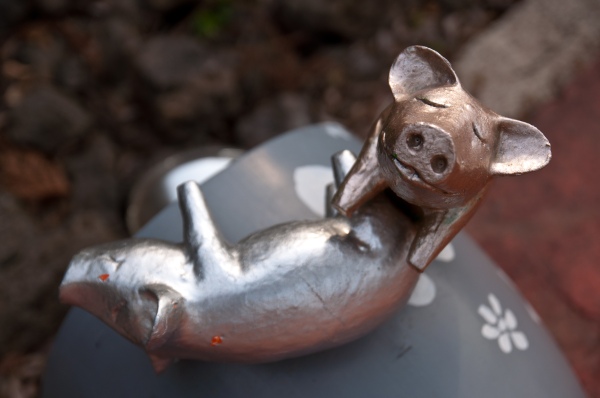 That was the end of our Jeju trip. After Love Land, we headed to the airport to catch our flight back to Jeju. Whilst Seoul is far more advanced and urbanized than Jeju, there’s something in the warmth & heart of Jeju and its people that is lacking elsewhere. Whether it’s the kindness of Sylvia, or the friendliness of our taxi driver, or the bubbliness of the waitress, it makes you feel welcomed. Perhaps it’s because the people are appreciative of what tourism has brought to them and feel obligated to make visitor’s stay pleasant.